Multi-criteria decision-making (MCDM) techniques are widely used in selecting the best alternative amongst a number of alternatives. In this paper, the quality of the operation of seven newly-established Indian institutes of technology (IITs) in India is analyzed by using the modified Simple Additive Weighting (SAW) method to subsequently rank them. The entropy method is used to determine the weights associated with the criteria under study. The criteria considered for the analysis are as follows: the percentage of vacant seats during student intake, the strength of the faculty, research publications, the sponsored research fund, the student success index, the number of the students who are employed through the placement cell, the number of the students who opted for higher studies and the number of PhDs awarded, respectively. The performance of this method is further compared with the MOORA, TOPSIS and COPRAS methods; the results obtained are found to corroborate well with those obtained by the modified approach. Furthermore, a sensitivity analysis is conducted by changing the criteria weights so as to establish the stability of the ranking obtained. IIT G is considered to have a better performance in all the methods than the other IITs do. This research has shown that the modified SAW is a useful and reliable tool for normal decision-making. 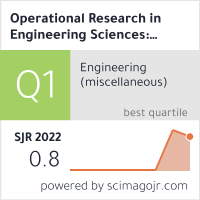